Beginning in the 1930s and continuing through the 1950s, federal expansion during the New Deal, World War Two, and continuing into the early years of the Cold War created a huge number of new federal jobs. From 1920 to 1940 Arlington County’s population more than tripled – from about 16,000 to 57,000. More than half of the county’s employed adult residents worked for the federal government. In an attempt to accommodate the population surge, residential building boomed.

Despite the rapid building of suburban homes and apartment housing, with both private investment and federal funding assistance, there were still not enough homes to match the sharp increase of federal employees looking to settle in Arlington. A 1942 survey found that 650 family housing units received 4,300 applicants. The federal government stepped in with multiple programs and initiatives to build houses in Arlington. These programs were diverse in scope and intention, from the well-planned, manicured, and permanent Fairlington, to the hastily built Green Valley trailer camp. 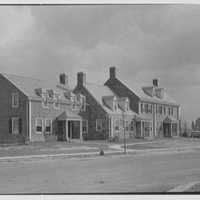 The largest and most ambitious of these projects was the Fairlington community. Located in south Arlington, across the small Four Mile Run creek from Green Valley, Fairlington construction was undertaken from 1942 until 1944. In those two years 3,449 one, two-, and three-bedroom Colonial Revival apartment and townhouse units were built along curving, landscaped streets. The project was publically financed via the Defense Housing Corporation (DHC). A piece of the National Housing Agency, DHC focused on building housing for defense workers and their families. Fairlington was their largest project, accounting for 61% of the organization’s total apartments built, and 31% of all dwellings built. Unlike many of the WWII-era emergency housing created for war workers, Fairlington was always meant to remain a permanent part of the county after the war’s end. This was reflected in the community’s detailed architectural care, landscaping, and the inclusion of parks, a community center, and a school. 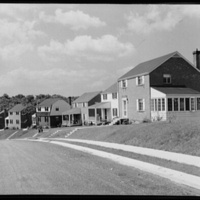 The DHC also authorized the construction of Columbia Forest neighborhood. Columbia Forest was intended to provide housing for “young married officers and ranking government officials” in 1941. With this federal backing and focus on housing federal civilian and military personnel, the Army Corp of Engineers designed houses and supervised construction of the community. Unlike its neighboring community of Fairlington, Columbia Forest had far less design integrity, filled with simple brick two-story box homes and less landscape and community planning. 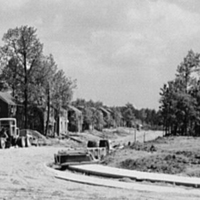 Demand was so high that construction was undertaken hastily. Because of this, community development in Arlington hit many snags.

For example, though Columbia Forest bordered several major county roads, including Columbia Pike, the neighborhood’s internal road networks were not linked to the county’s road networks. This created major delays for residents attempting to commute to their federal jobs in Washington. While Columbia Forest’s roads were inconvenient, other issues in the community were dire. In March of 1943 Arlington County officials had to evict several families from the neighborhood after it was discovered that they had been living for two months “without sewer services on a street pitted with yawning holes filled six feet or more deep with water.” 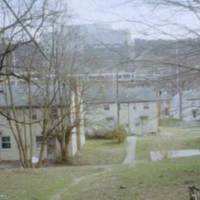 These barracks housing units did not comply with county zoning and planning laws. Because of this, at the war’s end Arlington’s county government pushed to have the buildings condemned and closed. The white housing developments, almost exclusively populated with recent arrivals of war workers, quickly folded to such pressures and closed shortly after the war. But Carver in Johnson’s Hill and Dunbar in Green Valley were populated with a more diverse mix of residents. Some were recently arrived war workers, but many were individuals with long roots in the county who had been displaced by the building of the Pentagon. Both created cooperatives to help residents stay in their homes. At Dunbar Homes, residents purchased their homes from the federal government for $264,000 with a $30,000 cash down payment and $234,000 in mortgages. Dunbar Homes remained an important part of the Green Valley community until 2005 when the property was torn down to make room for luxury townhomes. 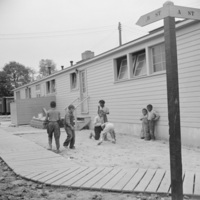 To help residents of Queen City and East Arlington displaced by the construction of the Pentagon and its road networks and in need of immediate assistance avoid homelessness, the federal government created a trailer camp on mud flats on the outskirts of Green Valley. Like Freedman’s Village, these trailer camps were constructed to serve only as temporary housing. But their construction was far inferior to the emergency war-time housing the government provided in 1863 for the formerly enslaved. Entire families, no matter their size, squeezed into trailers equipped with stoves for heat and cooking, convertible couch-beds meant to sleep four people, and no running water. The tight quarters, lack of proper sanitation, and muddy environment led to rats so large that Henderson recalled they could shake the boards of the walkways constructed so residents could traverse their muddy environment.

Trailers were actually illegal in Arlington County and officials were anxious to remove the camp. Many camp residents moved into the Carver and Dunbar homes upon its closure.