In 1960 the American Nazi Party protested Mario's Pizza because it was owned by long-time Arlington resident Howard Levine, a Jewish-American. In this photo, George Rockwell holds up a protest signs in front of the pizzeria.

Many of the group's protests and demonstrations centered on local Arlington issues. The group was also actively involved in county government and school board affairs. From their base in Ballston, group activities sometimes focused on national events by engaging in counter-protests and intimidation campaign for Civil Rights activities, such as following the route of the Freedom Riders throughout the South in 1965.

“Protests at Mario's Pizza,” Built By the People Themselves, accessed January 30, 2023, http://lindseybestebreurtje.org/arlingtonhistory/items/show/56. 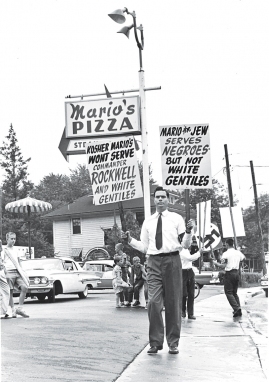